Each year, approximately 17,000 people in the United States alone suffer from a spinal cord injury. Most injuries involve contusion or bruising, which means that the spine is largely intact and neurons are still alive but need to be reengaged to transmit signals.

To do that, experts typically tap into electrical stimulation, which involves implanting electrodes to fire up the cells. But, the approach is invasive and targets cells indiscriminately, often resulting in muscle fatigue. While optogenetics — an approach that involves genetically targeting light-sensing ion channels — provides specificity, it also relies on implanted fiberoptics to provide light.

Now, for the first time, researchers have found a non-invasive method to potentially treat spinal cord injuries using light naturally emitted by living organisms — a phenomenon referred to as bioluminescence — as a way to fire up specifically targeted neurons below the site of injury. Bioluminescence has been used in the past to treat brain injuries and conditions like Parkinson’s Disease. 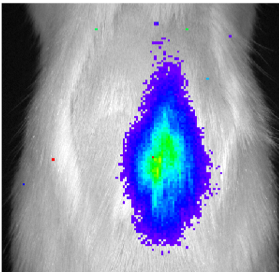 “For spinal cords in particular it’s very difficult to have some device implanted that can supply the light,” says Eric Petersen, PhD graduate from Central Michigan University and lead author of a recent pre-print hosted on BioRxiv. “That’s why I was interested in using the non-invasive approach where bioluminescence controls it.”

Petersen joined forces with Ute Hochgeschwender, a neuroscience professor at Central Michigan University, who has done significant work on bioluminescence and is currently working with researchers at Brown University and University of California, San Diego to further develop bioluminescence applications. Their work is part of a National Science Foundation NeuroNex grant.

Bioluminescence occurs as a result of a chemical reaction between a molecule luciferin and an enzyme luciferase. We often see bioluminescence in action in fireflies, glowworms, and even plankton. As part of the experiment, researchers worked on rats a day after they had suffered a spinal cord injury. They began by tethering luciferases that occur naturally in ocean crustaceans to light-sensitive ion channels, generating what’s referred to as luminopsins. Next, researchers gave the animals a luciferase substrate, coelenterazine or CTZ, which caused the luciferase to emit light and open the optogenetic channel. In order to express the luminopsin, the rats were injected below the injury site with adeno-associated virus or AAV. “The virus loads its cargo into the cell and the cell expresses luminopsin 3, which is an excitatory luminopsin,” says Hochgeschwender, a senior author on the study. “So when the substrate arrives at that area of the spinal cord, the light goes on and the neurons fire.” 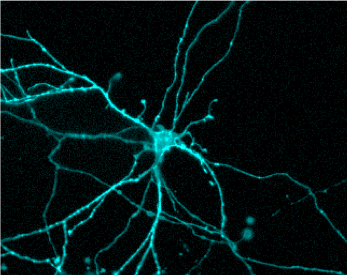 A neuron emits bioluminescent light, which is a chemical reaction between a molecule luciferin and an enzyme luciferase. Image courtesy of Ute Hochgeschwender.

Researchers continued to treat the rats every other day for two weeks. “They recovered faster and better, and even though we stopped the treatment after two weeks, they held their recovery,” says Hochgeschwender. “It looks like when you reengage the neurons, once they realize ‘oh we’re still in the game’ they go on.”

Hochgeschwender is currently looking into combining this approach with rehabilitation therapy to determine if that will result in more effective recovery. Researchers are also looking into whether waiting more than a day — perhaps weeks or months — after the injury would result in similar success.

“With rehab therapy, the idea is to promote plasticity or remodeling to help engage affected limbs,” says Petersen. “Our approach could potentially jumpstart that process, starting to reengage neurons at molecular levels, which would hopefully be more efficiently translated into reengaging the muscles.”