Neuroscientists Use Bioluminescence to Control Communication between Brain Cells

New method allows for manipulation of synaptic transmission from pre- to post-synaptic neurons.
By Divya Abhat
Posted On: September 30, 2021

Researchers have found a way to control communication between neurons by using bioluminescence or biological light emitted from one cell to activate light-sensing channels in another cell. While in previous methods, the light emitter and light sensor are both in one cell, this method -- referred to as interluminescence -- relies on both the pre-synaptic or sender cell and post-synaptic or receiver neuron to control activity.

"By doing this, researchers can more precisely control transmission of information between selected neurons by choosing pre- and postsynaptic partners, the time during which manipulation occurs, and the effects on the post-synaptic partner," says Ute Hochgeschwender, neuroscience professor at Central Michigan University and senior author on the study, recently published in Communications Biology. 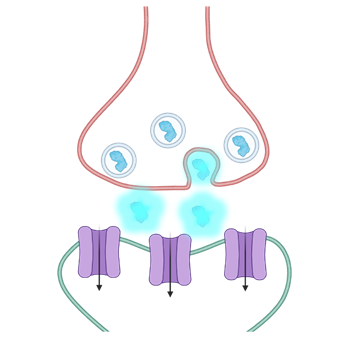 As part of the process, which was studied both in cultured cells and in mice, researchers rely on the enzyme luciferase released from a pre-synaptic cell to react to its substrate luciferin (the same chemical reaction that causes fireflies to glow). The synapse is the junction between neurons where information is exchanged, and using biological light emitted from one cell to activate light-sensing channels in another cell replaces the natural neural transmission with an "Optical Synapse." Much like we see in natural synapses, with interluminescence, neural transmission occurs when a presynaptic neuron is activated, or fired, and releases the luciferase; in the presence of luciferin the light generated will then activate the post-synaptic protein or opsin.

"This allows cell-to-cell communication of selected partners, something not possible with available technologies," says Hochgeschwender. Experimenters can also introduce luciferin when needed, which results in control in terms of when targeted postsynaptic cells are excited or inhibited.

This research is the brainchild of Hochgeschwender and Christopher Moore, neuroscience professor at Brown University -- both part of NSF's NeuroNex program created as part of the BRAIN Initiative that launched in 2013. Post-doctoral fellows, graduate students, and senior investigators from both universities and from University of California San Diego have all been part of this effort, meeting online on a weekly basis over the past several years. "The study is an excellent example of productive collaboration combining complementary expertise, scientific interest, and intellectual synergism to reach a common goal," says Hochgeschwender.

While the recent study focused on neuron-to-neuron communication, this non-invasive tool can be used for many types of cellular partnership, says Mansi Prakash, post-doctoral research associate at Central Michigan University and lead author on the study. It could, for instance, be used in a neuron-muscle partnership or perhaps to target the neuroendocrine system. "The application is wide in terms of usage," says Prakash. What's more, flexibility exists not only in terms of choosing partnerships but also whether to excite or inhibit a particular receiver cell. For example, when a person is experiencing muscle spasms, this interluminescence method could potentially be applied to silence or inhibit that particular spasm without completely shutting down muscle activity.

"We created a tool that permits direct experimental control of the efficacy and direction of synaptic transmission between specific partners," says Hochgeschwender. "This will be a key step in providing the next wave of insight into network dynamics and function."