Researchers Develop a Unique Tool to Study the Brain

LMO3 is the only mouse model that allows both optogenetic and chemogenetic access to the same neurons to study neural development and behavior.
Divya Abhat, NeuroNex Web Team
Posted On: September 14, 2021

By now, research clearly shows that early development in the brain plays a key role in later life. In a recently published study, researchers delved deeper into that early impact in mice populations using a unique model that can utilize both external light as well as chemicals to control neurons.

Typically, optogenetics—or the use of light to manipulate neural activity—has involved fiber optic cables implanted in the brain. Now, researchers are also able to implement the less invasive technique of bioluminescent optogenetics or BL-OG. As part of this technique, researchers rely on bioluminescence, which occurs as a result of a chemical reaction between a molecule luciferin and an enzyme luciferase. In order to achieve BL-OG, researchers tether a luciferase to light-sensitive ion channels, generating what’s referred to as luminopsins or LMOs. They then inject the luciferin into the animal, which causes the luciferase to emit light and open the optogenetic channel. Depending on the channel, BL-OG allows researchers to either activate or inhibit neuron activity in the brain.

There’s also the use of chemogenetics—a method that uses molecularly engineered receptors or channels along with specific kinds of chemicals to manipulate brain cell activity. But, until recently, there was no single tool that allowed both optogenetics and chemogenetics to study the same brain cells in mice at different periods of time.

"Brains in neonatal mouse pups are very small and they grow every day," says Ute Hochgeschwender, neuroscience professor at Central Michigan University who was part of the effort to develop the model. "Therefore, we used the chemogenetic aspect of BL-OG to stimulate neural populations during the 10 days of postnatal brain development." 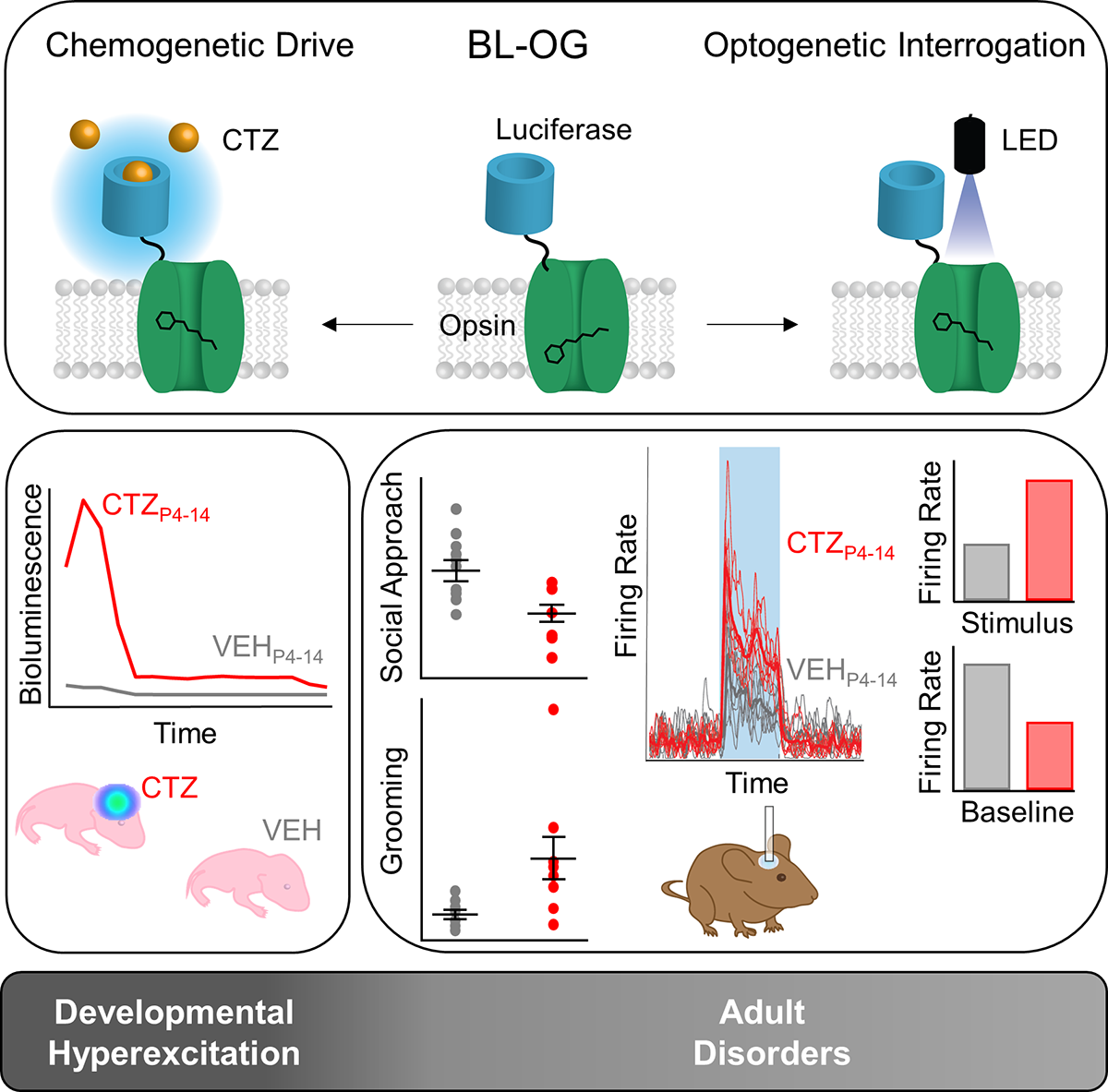 Using a technique referred to as bioluminescent optogenetics or BL-OG, researchers, for the first time, have been able to simultaneously tap into both chemicals as well as light to manipulate brain cell activity in mice. In order to achieve BL-OG (top), researchers tether a luciferase to light-sensitive ion channels, generating what’s referred to as luminopsins or LMOs. They then inject the luciferin—in this case coelenterazine or CTZ into the animal—which causes the luciferase to emit light and open the optogenetic channel. (Below) Using this method, researchers hyperexcited specific neurons during the first two weeks of the mouse's birth (left). As adults (right), these same mice showed Autism phenotypes including reduced social behavior and excessive grooming. Graphic courtesy of William Medendorp and Ute Hochgeschwender

This bimodal tool is also a conditional model, which means that the luminopsin (this version is referred to as LMO3) is only expressed in the presence of the enzyme Cre Recombinase—a critical feature that allows for a high degree of cell specificity.

“LMO3 is preceded by a LoxP-Stop-LoxP cassette, which prevents expression of the gene,” says Hochgeschwender. “When Cre Recombinase is present in a cell, it recognizes the LoxP sites and cuts out the stop, which was preventing it from expression and then allows expression.”

Hochgeschwender and a team of researchers used the LMO3 mouse model to study early brain development shortly after the mice were born. As part of their study, published in iScience, the researchers divided the mice into four groups. In each group, researchers chose to hyperexcite one of the following neuron populations situated in different parts of the brain— Emx1, parvalbumin, Dlx5/6, and dopamine transporter—by injecting the luciferin daily for 10 days beginning on day four after the mouse’s birth.

“People know there’s a lot of neural activity while the brain develops—including in utero, before the baby is even born,” says Hochgeschwender. “But, is that a byproduct of development or is it important for laying out the wiring based on which the adult brain operates?”

After exciting the four specific neural populations utilizing the chemogenetic access to LMO3 during days 4 to 14 after birth in four separate mouse cohorts, researchers left the mice alone to grow into adults and returned to see if the early interference had any effect on behavior and, with optogenetic access to LMO3, its underlying circuit activity.

It did. In cohorts where Emx1 neurons were hyperexcited, adult mice showed decreased social interaction and increased grooming—key phenotypes in autism related behavior. Other groups showed no change in their behavior. Not a single cohort showed any kind of general motor defects, indicating that the observed behavioral effects were specific to the hyperexcited neural population rather than random effects.

What's more, the team identified specific changes in circuit functions in the adult mouse brains that are characteristic of the observed maladaptive changes in behavior.

"This shows the power of BL-OG to study the developmental timelines and their impact on adult neural circuits," says William Medendorp, principal investigator at REA Analytics and lead author on the recent paper. "It also indicates that while there may be many varieties of insults during development (chemical, injury, etc.), simply increasing neural activity in specific regions can reproduce behaviors phenotypic of certain developmental disorders."

One of the motivating factors in doing this study was to look at the different causes that potentially influence neural activity early in the development process. Typically, when researchers are studying neurodevelopmental disorders, they look at a single gene—such as the Shank3 gene’s role in autism. But that gene only plays a part in a small percentage of the human population that’s on the autism spectrum disorder. In fact, says Hochgeschwender, there are lots of different genes that can factor in as well as environmental effects or infections during fetal development.

"We were thinking that any of these factors might influence the activity of neurons while the layout of circuits is being assembled—toxic chemicals, bad drinking water, insecticides, or perhaps a mutation in a post-synaptic channel gene. … looking at what type of excitation or excitation of which population leads to miswiring and maladaptive behavior might be an equally fruitful approach to neurodevelopmental disorders.”

For Hochgeschwender, the biggest takeaway from this work, is that effective tools finally exist for researchers to genetically target bimodal molecules and allow them to manipulate specific populations during development and in adult animals. Medendorp shares that viewpoint. "In our research we were able to noninvasively effect the depolarization of specific neuronal populations in the brain, while in adulthood we were able to study specific circuits through optogenetic fiber optics," he says. "These different options mean BL-OG provides the benefit of noninvasive chemogenetic activation, as well as the specificity and precision offered by optogenetics interrogation."

And, as a result of these tools, researchers will likely get a more complete picture of the relationship between neural activity or inactivity during development and how that influences the final adult circuitry on which behavior ultimately is based.