Neuroscience labs around the world are using the freely available information to build their own miniscopes.
Divya Abhat, NeuroNex Web Team
Posted On: July 24, 2018

A few years ago, researchers at UCLA developed a fluorescent microscope so light and small, it could be mounted on a mouse’s head. They posted instructions on how to build the microscope in a detailed wiki page that also included videos showing how to assemble the scopes, implant them surgically, and ultimately extract and analyze data. “Anyone can go and just access this webpage and basically build up their own microscope,” says Peyman Golshani, an associate professor of neurology at UCLA. Golshani, along with researchers Daniel Aharoni, Baljit Khakh, and Alcino Silva, helped develop the miniscope. “All you need is an idea and the will to do the experiment.”

Today, 400 labs across more than 18 countries have built some version of that open-source miniature microscope — an effort that earned the UCLA researchers the NeuroNex grant. This powerful tool — about an inch tall and weighing roughly 3-4 grams — allows researchers to study hundreds of brain cells in freely moving mice, tracking their activity for weeks. By doing this, researchers can better understand how memories are created and linked across time, for example, or how a neurological disease such as epilepsy affects large interconnected networks of brain cells. The advantage of being able to follow the same cells over time, says Golshani, is that “one is not randomly sampling different cells every day but actually looking at the same cells and seeing how their activity changes. This increases your power to make statistical conclusions.” 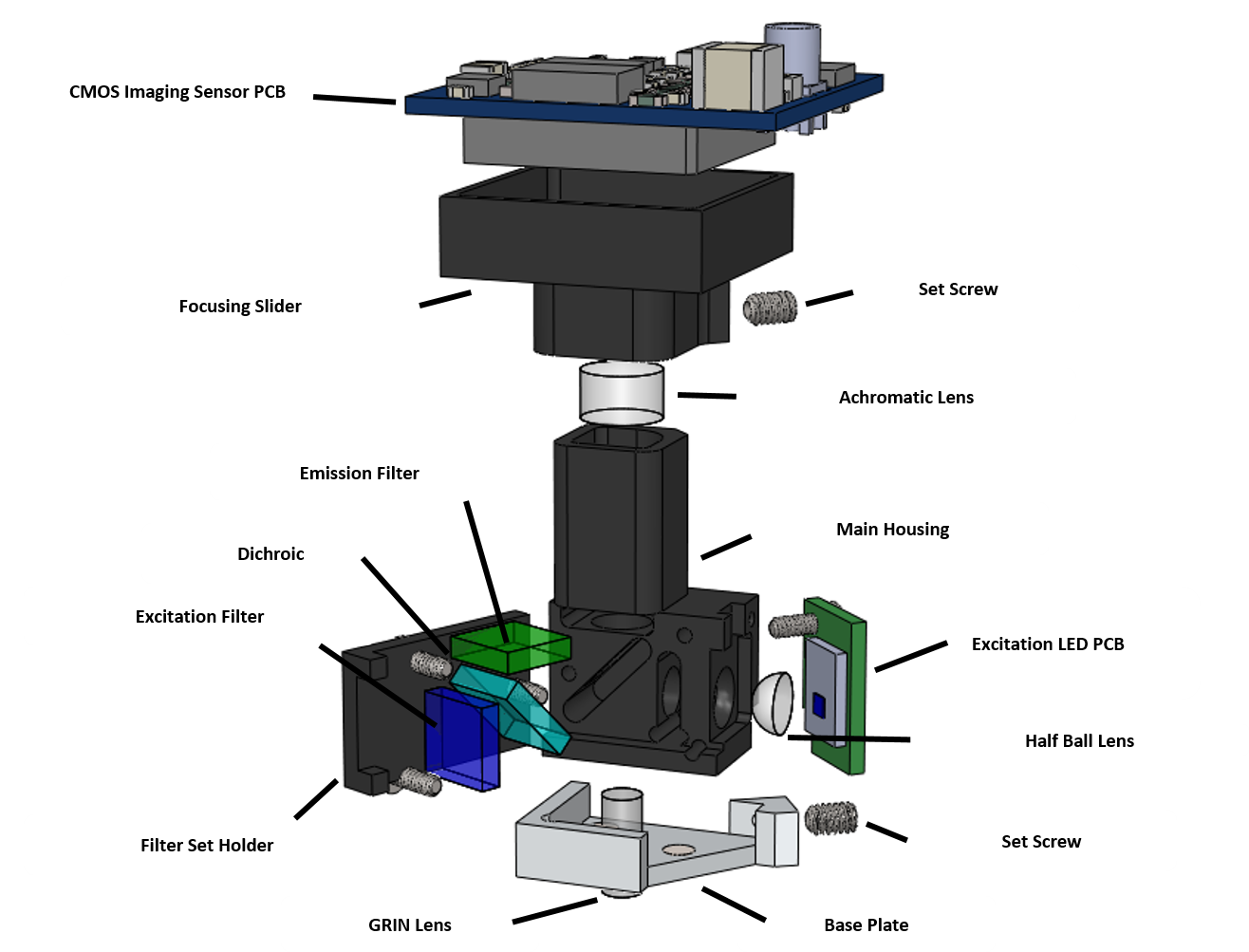 Miniscopes weigh about 3 grams and comprise multiple components including an imaging sensor that records neural activity, on board excitation light source for exciting genetically encoded calcium indicators (GECIs), and a baseplate, which is surgically implanted on the mouse's skull. Miniscopes can snap on and off the baseplate via a set of magnets. Graphic courtesy of Peyman Golshani

The idea to build a miniature microscope is by no means unique. In fact, Golshani was inspired by a similar microscope that researchers at Stanford University had recently developed. That particular microscope, however, is commercialized and can cost over $100,000. The UCLA version — made from off-the-shelf parts and lacking major overhead costs — can be made for $1,000.

“Our Miniscope project has focused on expanding access to transformative tools by removing common technical and economic hurdles,” says Aharoni who built the team’s first working miniscope prototype in six months. He notes that with increasing global access to affordable prototyping and manufacturing processes such as 3D printing, CNC machining, and circuit board fabrication, "there has never been a better time to work toward achieving equity across the global scientific community.”

Tapping into a Shared Resource

Thousands of miles away, a team of scientists and engineers at the Netherlands Institute of Neuroscience in Amsterdam (NIN) have built their own miniscope inspired by UCLA’s open-source project and are using it to examine how different brain regions work together to encode movements. “Although similar technology has already been around for a while, the UCLA miniscope initiative has been a fantastic resource for many neuroscientists that want to apply affordable open-source brain imaging technologies to study the neural underpinnings of more natural behaviors,” says Tycho Hoogland who leads miniscope development at NIN. In fact, the team’s miniscope is half the weight of the UCLA version and also allows researchers to use optogenetics to simultaneously stimulate other brain regions in freely moving mice. 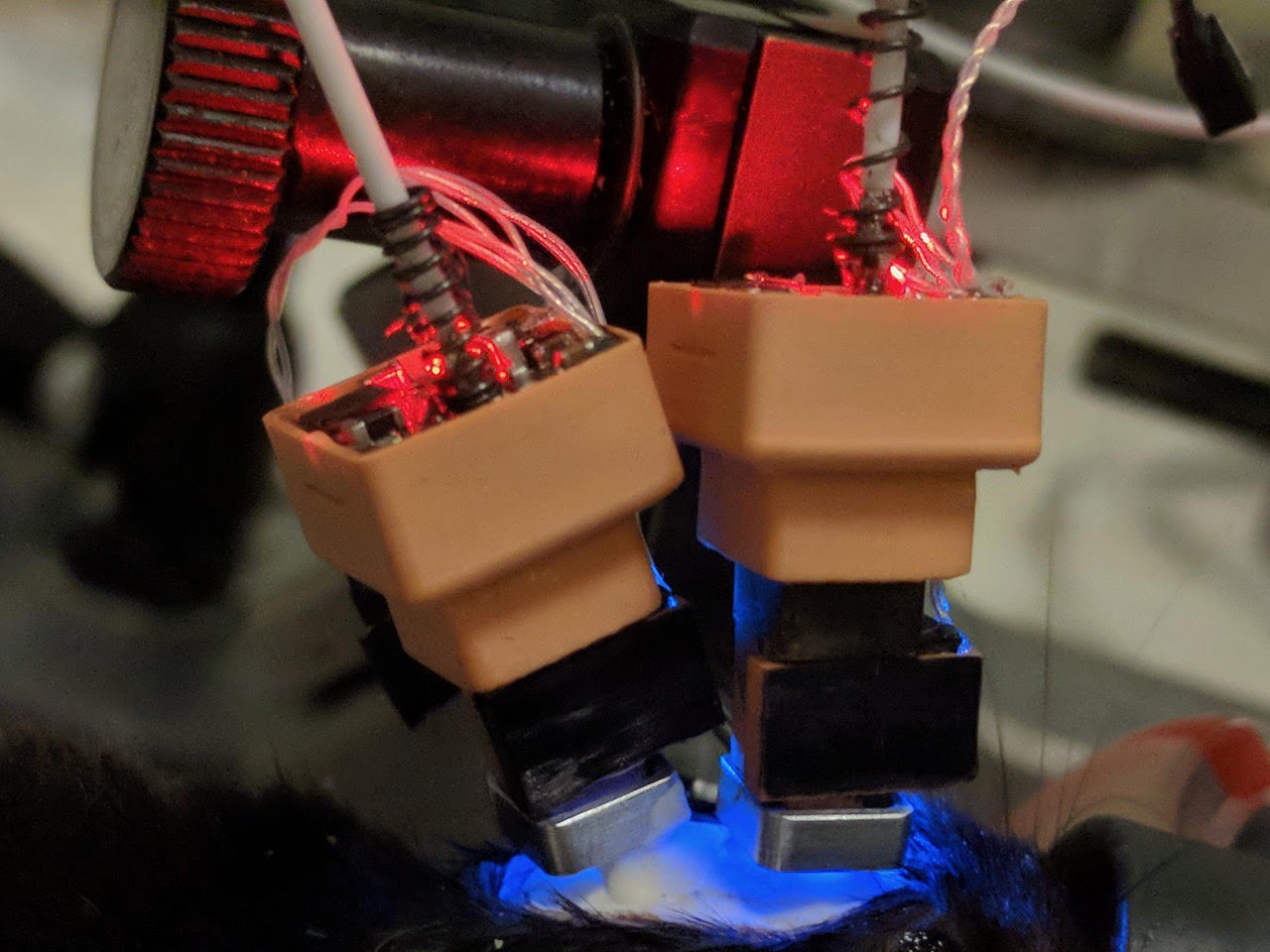 Hoogland is part of a growing community that is refining the microscope to meet their specific research needs whether it’s to build a lighter miniscope that can be used on songbirds or a wireless version that can be attached to bats. (The existing miniscope comes with a thin wire that connects the device’s thin cylindrical lens to a computer.)

Golshani’s team is also modifying the original version by developing an electrically tunable lens that also covers a larger imaging area. In addition, the team is working to add a 3D feature. “There’s a lot to be learned by looking at the brain in 3D because the brain is a volume,” says Golshani. “Some cells that are deeper may be doing different things than cells that are at the surface.”

The team is also building a miniscope that’s integrated with electrophysiology, as part of the NeuroNex grant. These recordings — made from 32, 64, and 128 sites along an electrode — will connect to a circuit board on the microscope itself, which will have a device for the electrophysiology. “All the data that we will be acquiring including the electrical recordings and the imaging will go through this single thin wire that we have,” says Golshani. “It will be very useful for people who need the electrical recordings to look at specific signatures but also want the imaging data at the same time.” In addition, they’re building a real-time feedback system that will allow the computer to instantly analyze the data and respond with stimulation of the brain when it senses specific cells becoming active. 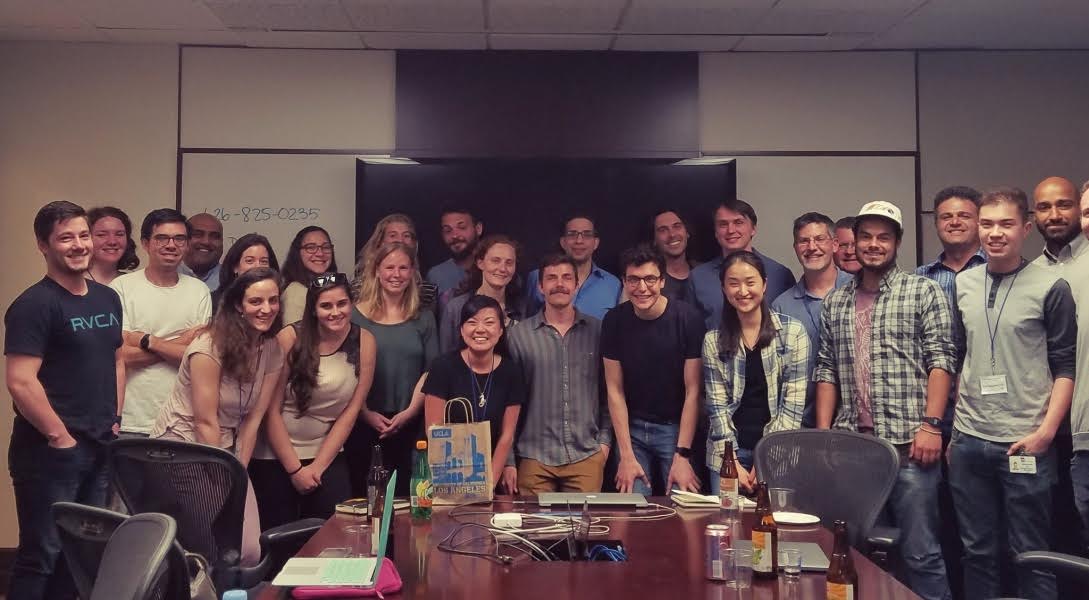 Scientists, engineers, and other participants take a break from a miniscope workshop at UCLA. These events, held multiple times per year, introduce researchers to the tool as well as educate them on its application and scope. Image courtesy of Peyman Golshani

Education and outreach have been a key element in this entire effort. Not only is the wiki a critical resource in encouraging the community to embrace the tool, discuss roadblocks, and share modifications; but UCLA researchers have also organized workshops that provide hands-on instruction on building the tool and understanding its full scope and potential. What’s more, the UCLA team hasn’t restricted their instruction to full-time researchers and scientists. Rather, they have also introduced the miniscope to elementary and high-school students, many of whom are building their own to image laboratory samples.

“It’s a good DIY project for ambitious high school projects,” says Golshani. “I’m very proud that a lot of people are being exposed to this technology.”